Tottenham Hotspur have risen above Chelsea in the latest UEFA coefficient rankings ahead of the new European season while Arsenal maintained their place in the top 10.

The coefficients are derived from a club’s results in the previous five years of participating in UEFA competitions as well as the current, although it’s still early days yet. Spain dominated the top with the likes of Real Madrid, Atletico Madrid, and Barcelona.

Real Madrid are still number 1 having won three of the last 4 UEFA Champions League finals. However, Atletico Madrid have moved above Barcelona and Bayern Munich and now sit second in the rankings.

Tottenham Hotspur reached their first-ever UEFA Champions League final last season. This saw them move from 17th to 12th while Chelsea dropped from 12th to 14th.

Chelsea won the Europa League last season but were still leapfrogged by Borussia Dortmund and Spurs and this is because the points garnered from reaching the last-16 stage in the 2014/15 season no longer apply.

Manchester City are sixth and now have a companion in the top 10 in Liverpool who sit 8th. Meanwhile, Arsenal are 9th and Manchester United are 10th.

The Gunners are in their third season out of the UCL but their deep progressions in the Europa League and last-16 exits in the UCL have helped them keep their place in the top 10. See image below for the top 15 teams in the rankings. 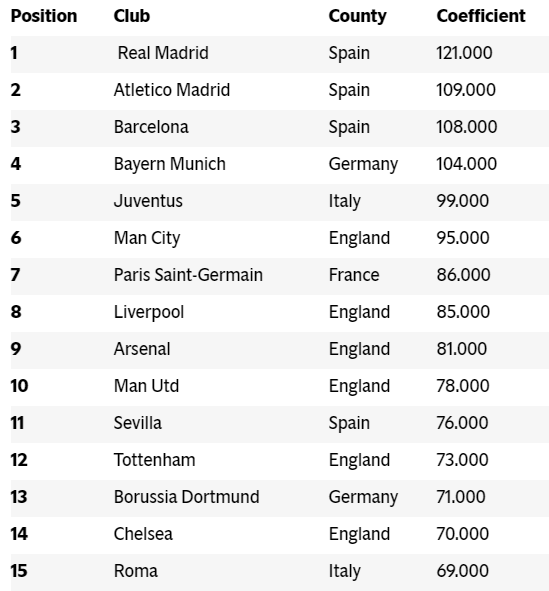 We evaluated Betting Sites in the to bring you the best Bookmakers and gameplay. Watch our videos and read our reviews for more